I positively identified the oak wilt fungus bretziella fagacearum in a Mexican white oak also known as the Monterrey oak in June 2018 off of Hwy 173 near Comanche Trace in Kerrville, Texas. Our Kerrville arborist sent that sample off to Texas Agrilife Extension Lab in College Station, known as TPDDL. When I got the call of a sickly Monterrey Oak, I expected it to be anything else but oak wilt. Though as I did my assessment of the client’s yard, I noticed oak wilt everywhere. The red oaks next to this Monterrey were showing their fall colors in June – a sign of Oak Wilt for red oak. 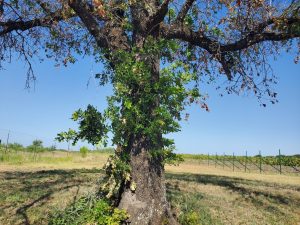 The live oaks were big & old all with oak wilt symptoms. John, the client, started informing me that my predecessor, Jim Rediker had told him over 20 years ago that his live oaks were infected with oak wilt. These oaks had full fertilizer & lots of irrigation water. The live oaks were “outgrowing” the fungus with those conditions it seemed. The leaves had no venial necrosis, they were just a very pale green & some tip burn. I did sample those live oaks to the TPDDL in 2018 with the Monterrey & they did all come back positive with oak wilt. 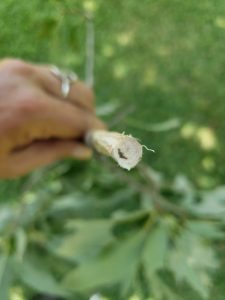 John had planted this white oak after he received a 5 gallon at free tree giveaway from KPUB in the early 2000s. 15-17 years on a high-infected oak wilt site, the tree was infected. As I took samples from his trees, I noticed a common pattern in the tissue of infected trees. They all had a spotting, of the vascular tissue area of the limbs. That was the point that I started doing field tests. The trees that we field test now with this vascular condition 98% are positive for oak wilt. We have even had a sample positive that the tree could not positively ID’d at TPDDL. We have classified it as a mystery oak. The tree bark looks like red oak yet the leaf says white oak. My son had actually found this tree at an old property in Fredericksburg, Texas. An old farm that was sold to a new winery. All we can say is wow! We found an oak that the lab can not ID. This has been fascinating as our research moves forward.